Franktown was initially known as “Franks Town” and was named in 1859 for James Frank Gardner an early settler to the area. It officially became “Franktown” in 1961 and was them designated as the county seat of Douglas County. 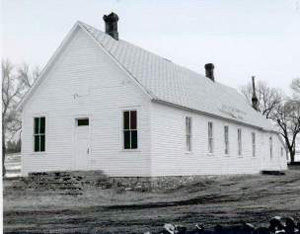 Established in Franktown in 1908, Pikes Peak Grange #163 was a natural fit for Franktown’s strong agricultural roots. During a cooperative farmers’ movement that swept rural America in the mid-1870s, several dozen local Grange chapters formed in Colorado, including the Fonder Grange (founded in Franktown in 1875) and its successor, Pikes Peak Grange #163. Although both belonged to State Grange (which set up credit unions, insurance programs, and other services) and to National Grange (which pursued long-range political goals), it was the local chapters that really affected farmers’ lives. The dances, holiday picnics, and town meetings they sponsored helped sparsely populated communities forge a sense of identity. Still active today, Pikes Peak Grange #163 occupies its original hall and is listed in the National Register of Historic Places.